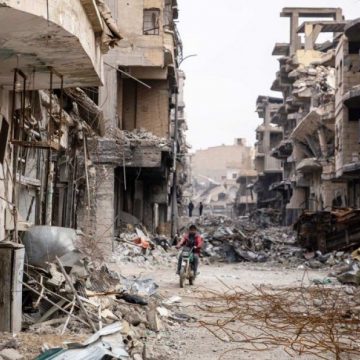 After nine years of war, Syria’s economic situation is tragic and the financial crisis, which also affected Lebanon, dealt the latest setback. In recent decades, Lebanon’s banks have been a lightning haven for Syrian investors. With the collapse of the Lebanese lira to over six thousand lire for a dollar, and the fall of the Syrian lira itself, the severe financial crisis is overcoming the economic crisis in both countries.

In less than a year, the Syrian lira has lost more than 70 percent of its value against the dollar, while commodity prices have risen by 69 percent, according to the World FoodProgramme.

The quality of life of the Syrian citizen records these figures which reflect a situation that may be irreversible for the next few years. Since January 2010, the cost of basic food has increased by at least 27 times. The cost of essential food has tripled in the last five months. Average meat consumption has fallen by 95% in the last 8 years. Government ovens that subsidized bread distribution free of charge, producing 7 days a week, in May 2020, produce twice a week with a 75% decrease. Electricity consumption has plummeted by 60% with a daily reduction of 30% in the supply time. The Syrian government has created the system of distribution cards of primary goods (bread, eggs, sugar, flour, chickpeas, oil seeds and gas cylinders for the house) which has provoked the counter-chant of a thriving black market , which Syrians call ” Real Market.”

The defeat of ISIS and territorial control by the government in Damascus in almost all the country, unfortunately, did not lead to the dissolution of the conflict.

The presidents of Russia, Turkey and Iran met by video conference on July 1st and again expressed the belief that “the war in Syria cannot have a military solution but must be resolved only through a political process”.

The mediation formula, advocated in the various negotiations, was based on the opposing principle of a government and an opposition, as if these two elements were the only actors involved in the conflict.

The Syrian government has never been represented by a monolithic entity, as has the opposition, composed of a patchwork of spurious alliances. Negotiations have failed due to the inability to include on the one hand the galaxy of actors linked to the different Islamist formations and on the other syrian civil society. Staffan De Mistura had proposed, at the time, the inclusion of civil professionals, women, human rights defenders, and the Syrian constitutionalist world at the negotiating tables. Following this example, Pedersen tried, during the Astana talks, to move in the same direction, aiming for greater enlargement and inclusion of most of the actors involved.

The United States failed to defeat the government of Bashar al Assad militarily and continues hostilities with new sanctions included in a new piece of legislation called the “Caesar Act”. The law, which came into force on June 17th, 2020, sanctioning several Syrian figures, including President Assad, for war crimes committed against the civilian population and affects Syrian industries, from the military sector to infrastructure and energy, as well as individuals and Iranian and Russian entities providing funding or other assistance to the Syrian government. This is the first time that the European Community has been involved in the reconstruction of Syria.

The war shows no signs of ending and sees Syria at the mercy of external interests with effects that the local population continues to pay with deaths, suffering, instability, destruction of civil coexistence.